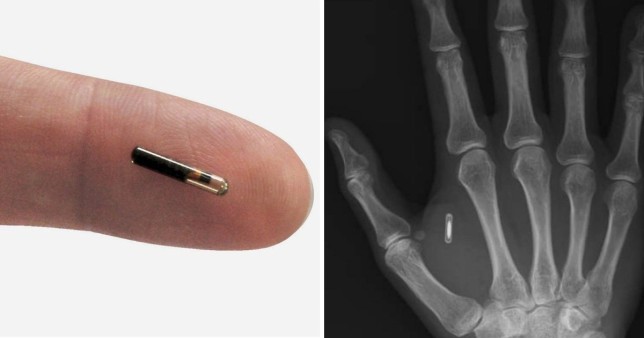 The lines separating humans and technology are blurring. Should we embrace it?

Since 2017, I have been a walking cyborg. No, not the Hollywood type (looking at you Terminator and RoboCop), but instead, a “vanilla” cyborg, if such a concept exists. Put simply, I have a microchip the size of a grain of rice in each of my hands. And since my arrival on Bowdoin’s campus this fall, I have used one to act as my college OneCard.

Imagine: you’ve just trudged across a snow covered quad and are eager to get back into your warm dorm. What if instead of rummaging through your pockets for your OneCard, you unlock the door by presenting your bare hand to the sensor? This is my reality, and it is quickly becoming that of others around the world, too.

Traditionally, fusing technology with the human anatomy has been reserved for those with life-altering conditions. Subsequently, it is costly, and accessible only to the top one percent. These highly effective technologies are usually designed to restore lost bodily functionality. Pacemakers, hearing aids, and even artificial hearts are all examples of “biohacks”: augmentation to enhance the human body.

This trend in biohacking begs the question: is there a space for minor quality of life improvements that are accessible and affordable for the average person? Can a healthy individual, without access to vast wealth, enhance their body and living quality with technological implants? Yes, they can, and I among others are living examples. An emerging community of amateur biohackers has proven that anyone can embrace and benefit from cybernetic enhancements.

“The human body has limitations, but biohackers are constantly thinking of how those limitations can be overcome — how life can be made better or more convenient (like removing the need to carry around keys all the time) through the use of technology.” — Dina Spector

Radio-frequency identification (RFID) microchips are presently the most popular form of biohacking and are what I have implanted in my hands. In the same family as Near Field Communication (NFC) and Bluetooth, RFID is commonly used in pets and supply chains for identification purposes. For instance, RFID is being used to power cashier-less grocery stores much like Amazon’s. Each chip stores identifying information and functions as a tiny computer, storing information like a small USB flash drive. OneCards are a form of Low Frequency, passive RFID, much like the cards and keyring devices that you might use to access an apartment parking lot, check into the gym, or even navigate Disney theme parks. On Bowdoin’s campus, we use OneCards to access residential and academic buildings, dorm rooms, and dining halls.

The capability to implant people with microchips has its roots in the field of medicine as far back as the innovation of pacemakers in the 1950s. In 1998, Professor Kevin Warwick of the University of Reading reported the first microchip implantation for human identification purposes. The use of RFID has only expanded in the decades since.

Governments (true to fashion) quickly found a use for this breakthrough, and corporations followed suit: in 2004, “the Mexican Attorney General’s office implanted 18 of its staff members to control access to a secure data room.” Later, “nightclubs across Europe use implants to allow VIP entry and enable automated payments.” Since, reports of people implanting themselves with commercially available RFID tags for a variety of applications has become a familiar, if not regular, occurrence.

Moreover, the hype around biohacking and microchipping has exploded: just look at the TikTok account @robot_scott, which has just over 700k followers and 9.3M likes. Millions of more views on the topic can be found on YouTube, and there exists an active 3000+ member forum with 91.8k posts as of the time of writing.

People are, as we’ve seen, willing to grant technology a great deal of permission to dig into their personal lives. It is now standard to carry a supercomputer in one’s pocket, with assistants driven by artificial intelligence to make day-to-day life more seamless (Siri, GPS Navigation). Furthermore, the prevalence of cosmetic surgery shows that healthy people are willing to undergo extremely invasive procedures for superficial reasons.

These two phenomena led me to implant a microchip of my own: permissiveness of the intrusion of technology into personal lives, and a willingness to apply superficial changes to healthy bodies. Biohackers view bodies as adaptable and upgradable utility vehicles, a perspective that places biohacking as the next step in human evolution. For instance, humans at birth possess five senses, and that is traditionally seen as it. In a biohacker’s eyes, this number isn’t definite. In fact, some biohackers have implanted magnets to their fingers’ nervous ends, and in doing so have gained the ability to feel magnetic fields, effectively giving them a literal sixth sense.

These examples just touch the surface, and there are many more avenues for interfacing with the environment on the horizon. One such example lies in the homing pigeon, who have magneto-sensing cells in their beaks. Should humans decode that genetic information and implant it (via Gene drive or other pathways), humans may eventually be capable of knowing where magnetic north is without the use of a compass.

Let’s take it back to the keys for a second, a piece of metal cut machined specifically to authorize you to go through a door. Why can’t the door just know who I am and open? This is what many RFID implants address, allowing identification and authorization using implants alone. Beyond building and home access, these chips can be used to start cars and unlock safes or computers.

The simplicity of it being inside of my hand is the biggest draw; I don’t need to think about charging the chip, or if I have it with me. People who have been microchipped, myself included, feel that the technology actually becomes a part of their anatomy.

So, you want in. Now what? Retailers have popped up selling inexpensive implant kits that include everything you need to get going. Because the chips are so small (about the size of a grain of rice), the implanting procedure is quick and not very invasive. It’s akin to getting a vaccine, just with a fairly large needle. You’ll walk out with a small bandage and a few days of swelling. The chips are usually inserted in the fleshy area between your thumb and forefinger. Once implanted, you can feel it if you’re trying, but it’s not something that you regularly notice. Doctors, piercers (or a friend, as was the case for me) perform the injection for you. To make the microchip “work,” implantees can use various USB devices to read and write data. This device is what allowed me to write the contents of my personal OneCard onto the microchip in my hand. It’s a simple process.

Looking forward, the intersection between technology and the human body brings with it not only exciting possibilities, but also pressing ethical and philosophical dilemmas. Should we accept both the unintended and unknown consequences that come with giving technology greater presence in our bodies? I say we absolutely should, as pushing the boundaries of what it means to be human is inherent to the human experience. As put best by Zoltan Istvan, author of The Transhumanist Wager, “We shouldn’t forget our sense of being human is ultimately based on millions of years of evolution. Like it or not, we are still stardust from eons ago–and not just biological humans. Our evolutionary heritage is the cornerstone of why human beings are what they are: mammals that are becoming gods.”